The Art of War (on Amazon)

Amazon’s rapid rise to dominance, which now accounts for upwards of $0.43 of every dollar spent on e-Commerce, has resulted in a hyper-competitive selling environment for physical products brands. For an increasing number of product categories, Amazon is a battlefield, with sales from end-consumers as the prize. Brands are engaging in all-out “business warfare” including espionage and “Black Hat Tactics”. For founders and executive teams (generals, lieutenants, etc) looking to win the battle on Amazon, take heed of Sun Tzu’s warning that war must not be commenced without due consideration. Fortunately, the strategy and tactics required to beat the competition on Amazon are analogous to two well established concepts of military theory that you can learn from and use to gain an advantage. 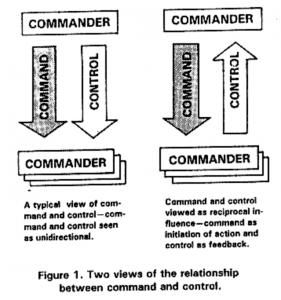 A fundamental component of military doctrine is Command and Control, a construct that was overhauled in the late 1980’s / early 1990’s to adapt to changing conditions of warfare. Previously, Command (the vertical hierarchy of order and authority) and Control (the power to influence people’s behavior, decisions and/or events) were unidirectional from top to bottom.

In the new construct, Command is the same, functioning in a top-down capacity from commander to subordinates, but Control is bottom-up, with the power to influence people’s behavior, decisions and/or events coming from the subordinates of the commander. This excerpt from an Air Force white paper defines the concept well:

“Control takes the form of feedback—the continuous flow of information about the unfolding situation returning to the commander—which allows the commander to adjust and modify command action as needed. Feedback indicates the difference between the goals and the situation as it exists. Feedback may come from any direction and in any form—intelligence about how the enemy is reacting, information about the status of subordinate or adjacent units, or revised guidance from above based on developments. Feedback is the mechanism that allows commanders to adapt to changing circumstances—to exploit fleeting opportunities, respond to developing problems, modify schemes, or redirect efforts. In this way, feedback “controls” subsequent command action. In such a command and control system, control is not strictly something that seniors impose on subordinates; rather, the entire system comes “under control” based on feedback about the changing situation.”

In the war on Amazon, I’ve observed that the generals are most commonly operating in the old model of Command & Control. I consistently observe feedback (i.e., intelligence) that:

With the help of a plugin called AMZ Scout, I run price analysis on Amazon, and consistently observe that the lowest price products are most likely to rank at the top of Amazon’s organic search results. I also find that private label brands are consistently ranking on the first page of search results for keywords with high search volume. I also accept the findings via consumer purchase behavior surveys that demonstrate price is the number one factor affecting a purchase decision.

If you are willing to beat your competition, you must be willing to make the necessary changes to average selling price and profit margins - even if those changes are painful to make. Switching to the new model of Command & Control will help you win more battles in today’s rapidly evolving marketplace on Amazon, but you also have to be willing to sacrifice your generally or traditionally accepted tenets of truth. 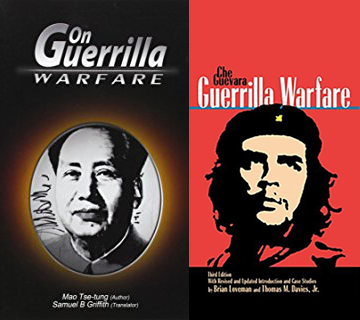 “War is always a struggle in which each contender tries to annihilate the other. Besides using force, they will have recourse to all possible tricks and stratagems in order to achieve the goal.” - Che Guevara

Mao Zedong and Che Guevara are both credited with advancing the military theory behind guerrilla warfare. This concept is more widely established than Command and Control, and there are a few key principles founders and executives need to comprehend. Setting aside the strong ideological and political focus of these works, the principles of guerrilla warfare that apply include:

The conditions of warfare are evolving rapidly on Amazon. Smaller guerrilla units - which I will hereby associate with private label sellers (which includes this linked definition of “private label sellers” and Chinese-manufacturer-turned-brand on Amazon - are demonstrating that many of the principles of guerrilla warfare are effective on Amazon. Larger armies - which I will hereby associate with large brands and/or brands that predominantly sell in traditional retail channels like bricks & mortar retail - are demonstrating that they can be defeated by private label sellers. In my experience, I’ve observed that in the war on Amazon:

Black hat tactics on Amazon include prohibited behaviors such as paying for Verified Purchase reviews, paying to have negative reviews added to competitor products, gaming the Amazon A9 search engine algorithm, and using customer data after the purchase to increase rate of reviews. The reaction to these tactics feels the same as the generals who reacted to ambushes, snipers and other tactics of guerrilla armies. I’ve seen entire product categories on Amazon previously dominated by large brands fall prey to private label brands and low-cost manufacturers out of China. Take a look at the brands in the headphones category or the supplements category by comparing the Amazon Best Sellers to the brands that dominate shelves in brick & mortar retail in those industries - the guerilla warfare brands are winning on Amazon. This is partly a byproduct of the changing nature of distribution, including cutting out middlemen to pass along cost-savings to end-consumers. The challenging reality for large brands is that end-consumers don’t seem to have any issue with the change of guard to private label sellers. In many cases, the average review ratings are better for the cheaper private label products on Amazon than the more expensive (and supposedly higher quality) products from large brands on Amazon.

For the generals and lieutenants reading this, if you do not adopt or adapt to guerilla warfare tactics, you will lose the war. I believe the average lifespan of companies on the S&P 500 list is a trailing indicator of this prediction. This doesn’t mean you should immediately engage in espionage, but it does mean that you need to be deliberate and methodical about how you will counter the unscrupulous tactics your enemies will deploy against you. As Michael Corleone said in the Godfather Part II (and was postulated by Machiavelli), “keep your friends close and your enemies closer.” Take the time to understand what these private label sellers are doing and how they're doing it. If you don’t, you may go the way of the British in the American Revolution when red coats weren’t willing to adapt to guerrilla tactics taken by the Colonial armies.

Amazon is a Battleground in the Fight for Customers

The war on Amazon is a fight for sales, a fight for customer acquisition and a fight for market share. If you are a leader of a brand that sells physical products, you need to build an army that can win the war on Amazon. That includes hiring people who have run successful private label businesses. You should educate yourself about your enemy. You should take time to understand the changing conditions of Amazon warfare by researching your enemy's techniques, including private label seller forums. You should test buy products from your competitors and take immediate action to make your customer experience better - especially if you sell a consumable product that requires a conversion from trial to recurring purchase behavior. You should equip your army with the personnel, strategies and tactics of guerrilla warfare by enrolling in courses about private label selling. You should remodel your leadership approach to meet the new definition of Command & Control that acts upon feedback of the difference between the goals and the changing situation of the battlefield. You should make calculated sacrifices to gain competitive advantage in the war, even if that means conceding other battles that you have historically won. And above all else you must be a leader who is willing to take decisive action.

Kevin is the VP of Growth & Strategy for Amplio Digital and has been with the company since 2014. Kevin drives growth for Amplio and Amazon strategy for its clients. His team manages over $250MM in annual GMV on Amazon for brand manufacturers across North America and EMEA.

Why Amazon Product Reviews are Critical to Your Omnichannel Sales Strategy